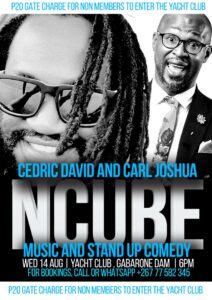 We’re sure many of you know Cedric, Botswana’s well loved bard. But did you know he has a brother?

Cedric’s brother Carl is an international Standup comedian who has been breaking barriers to bring Zimbabwean standup comedy to the world. Carl truly has been “the new face of Zimbabwean comedy” according CNN African Voices.

Carl Joshua Ncube has made it his mission to bring the the spotlight on Zimbabwe and as a result on the growing Zimbabwean stand up comedy scene by his relentless drive and ambition to tell his story to the world! ”

Come and join us for music and fun at the Gaborone Yacht Club!